Taranaki has a network of nine seismic monitoring sites linked by radio to a central location for near-immediate analysis of the data they generate. 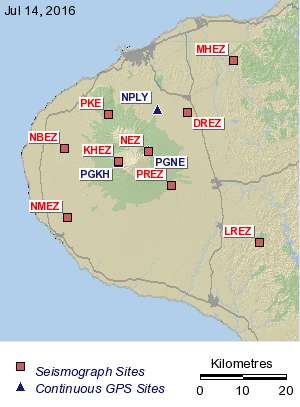 The network was designed to gather accurate information about natural earthquake activity in the region, including under and around Mount Taranaki.

This information provides baseline data that is used to provide an indication of potential volcanic activity, which is of vital importance for providing an early warning of a volcanic eruption.

The information is also useful for ongoing scientific research.

Seismometers are installed at carefully chosen sites in the region. The network was upgraded and expanded in a three-year project that ended in early 2010, and the map above shows the monitoring sites.

How does it work?

A seismometer is a small electronic device that detects pressure waves generated by an earthquake. These pressure waves travel through the ground. Each seismometer will detect the arrival time and strength of each wave. This information is transmitted by radio and telephone line to a computer system which calculates (by triangulation) the location and size of the earthquake.

All nine seismic monitoring sites have state-of-the-art 'three component' seismographs that detect three directions of movement — up-down and, for example, east-west and north-south.

By analysing the type of information that is being recorded by the network, scientists can determine whether or not the earthquake is of a volcanic nature.

'Volcanic tremors' have a different signature to the more common 'tectonic earthquakes'.

How seismic waves are analysed by GNS to determine an earthquake's location and magnitude.

How was it achieved?

The Taranaki Regional Council was the first Regional Council in New Zealand to embark on a project of this nature, with the assistance and expertise of the University of Auckland, Massey University and GNS Science. The Taranaki seismic monitoring network has since become part of the national monitoring system operated by GeoNet(external link), a joint venture between GNS Science and the Earthquake Commission.