Experts generally agree that climate change is affecting New Zealand’s weather patterns. An increase in extreme rainfall is likely as the temperature increases through the 21st century, potentially increasing both the severity and frequency of flooding.

Climate change projections suggest more frequent, more severe and more intense extreme rainfall events, and steadily increasing higher annual average rainfall overall. As a consequence, there will be an increase in the risk of flooding. 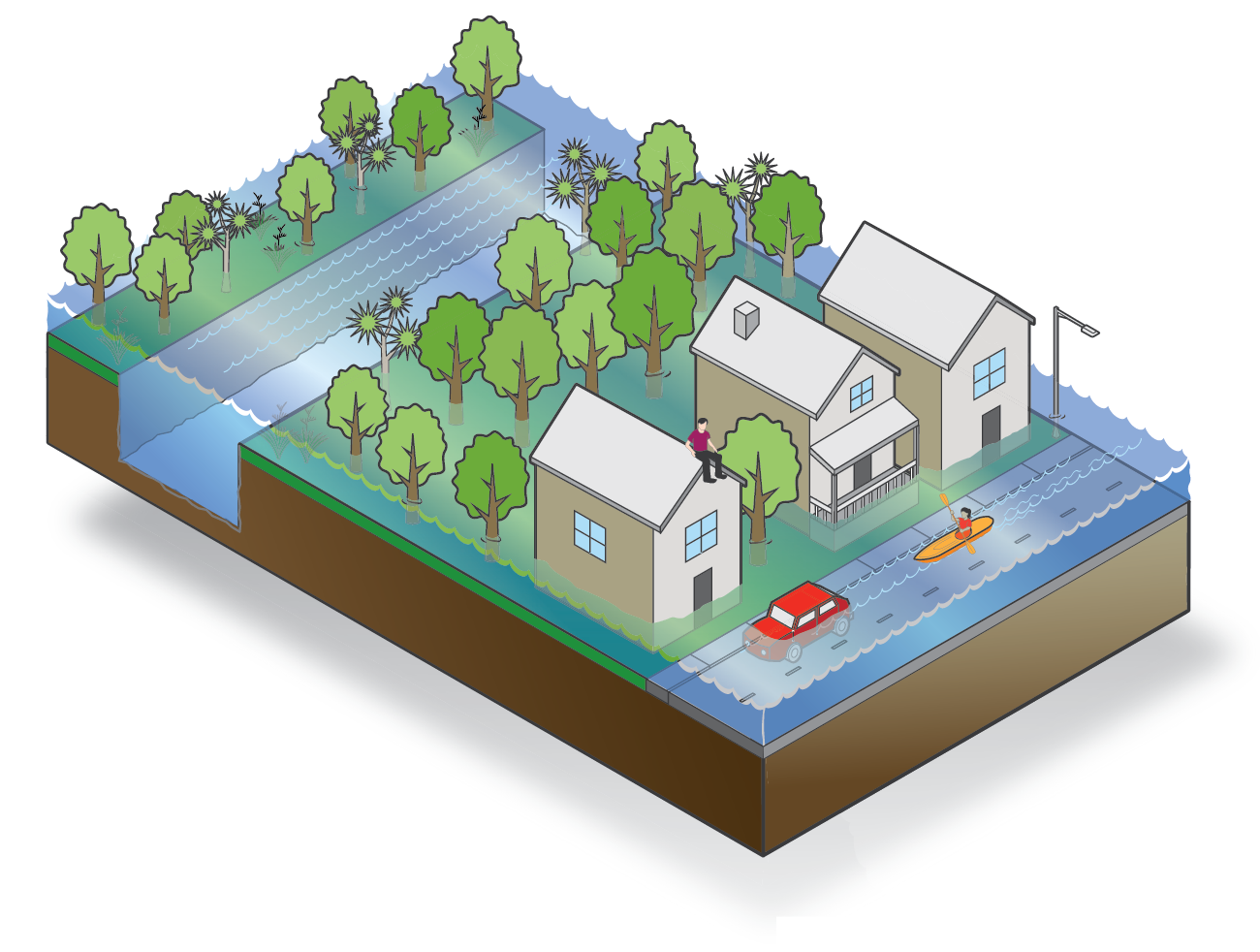 Floods are usually caused by heavy rain or thunderstorms and can cause injury and loss of life, property damage and pollute water and land.

There are over 530 named rivers in the Taranaki region. Over 300 of those flow from the slopes of Mt Taranaki in a radial pattern and are characterised by short narrow catchments with steep gradients. Other rivers flow from the hill country, with short tributaries contained by narrow valleys, and carry high sediment loads. Although the majority of the region’s waterways are relatively small in size and length, frequent high flows causes channels to be quite active, necessitating on-going surveillance and occasional maintenance.

Land use and increased urbanisation also increases the likelihood of flooding, as it decreases the amount of land that water can drain into and increases the number of impervious surfaces water flows over, e.g. paving, road surfaces, hard landscaping.

Flooding in urban areas often leads to evacuations due to the damage to homes. Risk to life from flooding in New Zealand is relatively low compared to other countries but social disruption can be considerable when people are evacuated for long periods of time. Inundation of houses and businesses may require inspection and clearance from public health agencies and the district council prior to any return. Restoration of services (clean drinking water, sewage, electricity) have to be considered, even if a residential property itself is suitable for habitation.

Floodwaters and debris carried in a flood can damage or destroy or over-top bridges and isolate small communities and/or damage lifelines that may be attached to the bridge (eg water or gas pipes). Scouring and destabilization of bridge piers and abutments by swift-moving water is a major contributor to flood damage and has caused fatalities in the past.

Floodwaters and debris can obstruct important regional and national roads and local access. Flooding may remain on the ground for some period of time before it dries out and roads are able to be cleared. Road and rail infrastructure can be damaged by rainfall-induced landslides that can sometimes accompany flooding. Scouring of river banks may cause foundational instability or collapse of adjacent roads/rail lines; slips can also block roads.

Power lines and other power supply infrastructure are often damaged, and sometimes destroyed, by the impact of flood waters and/or flood debris on sensitive wiring and equipment. These effects can take some time to repair due to water damage of electrical infrastructure, or loss of access to a site.

Flooding can cause environmental and public health issues if the capacity of water treatment and sewerage collection and treatment systems is overcome. Dirty raw water supplies will reduce throughput at water supply treatment plants. Flood water ingress into sewer pipes and pumping stations will cause overflows of raw sewage into adjacent locations, water courses, and ultimately the sea.

Damage, closure, loss of retail supplies will cause an economic impact to the region. Hazardous chemicals may be present in floodwaters which can cause a risk to people and may be expensive to clean up.

Flood protection works have been constructed in Taranaki where there is a significant flood threat to urban areas. Formal flood protection schemes have been designed and built to protect mainly urban populations and assets. Council management plans and asset management plans are in place to ensure these schemes continue to effectively deliver scheme benefits on a long-term, sustainable basis.

Analysis of MetService warnings and telemetry data provides a forecast capability, which enables the Regional Council to provide information to emergency services, road controlling authorities, district councils and the community to enhance awareness and assist with their own flood management.

A number of different parties have a role in flood management and the responsibility for certain tasks depends to some extent upon the location and scale of the event.

The Taranaki Regional Council's Flood Manager is responsible for issuing flood warnings. These warnings are based on rainfall and river levels being recorded around the region and on weather forecasts issued by the MetService. Where an immediate threat to life is apparent, the Flood Manager may recommend that evacuations are undertaken.

Evacuations in any emergency are undertaken by the emergency services. Civil Defence gets involved to co-ordinate the efforts and to provide for welfare of the affected people. The Group Controller also liaises with media to keep public informed of what is happening.

The MetService puts out severe weather watches and warnings through news services and on their website www.metservice.co.nz(external link)