A volcanic eruption of Mt Taranaki has been assessed as a moderate-very high hazard for the Taranaki region and as one of three regional hazards with national significance.

Mount Taranaki (Taranaki Maunga) is one of the most symmetrical volcanic cones in the world and, at 2,518 meters high, is the second-highest peak in the North Island. The maunga is located within Te Papakura o Taranaki (Egmont National Park).

Mt Taranaki is a composite cone or strato-volcano, made up of alternating layers of volcanic ash and lava flow. Eruptions from strato-volcanoes usually occur from a central vent and commonly create lava domes and flows, lahars, floods, and sometimes major collapses. The current summit crater of Mt Taranaki contains a lava dome surrounded by ice and snow.

Mt Taranaki has high cultural and spiritual significance for all eight iwi within the region. Each iwi has its own unique history, and important places, in connection with the mountain.

Mt Taranaki is part of a volcanic chain that includes the Kaitake and Pouakai Ranges, Paritutu, and the Sugar Loaf Islands. Mt Taranaki is the youngest, largest, and only remaining active volcano in the chain. This volcanism is related to subduction of the Pacific Plate below the Australian Plate. Mt Taranaki began forming about 130,000 years ago and moderate to large eruptions have occurred on average every 500 years with smaller eruptions occurring about 90 years apart. The last major eruption of Taranaki occurred around 1854. It's estimated that the volcano has erupted over 160 times in the last 36,000 years.

The cone of Mt Taranaki has collapsed several times and surveys have confirmed that historical landslides, lava and pyroclastic flows have reached between seven and 40 kilometres from the cone, reaching the present Taranaki coastline. Ash ejected from the mountain has ranged in size between from less than a millimetre to several centimetres. In addition, on-going erosion events after an eruption can cause effects beyond the volcanic cone at any time.

There are no indications that Mt Taranaki is about to erupt, however, its unbroken geological history of activity tells us that it will in the future. We are in an unusually long (although not unprecedented) lull in activity. Recent research (2014) estimates an 81% probability of at least one eruption by 2065.

The next eruption could take one of three possible general forms:

Mt Taranaki volcano is well monitored by the GeoNet project, and quiescent volcanoes like Taranaki almost always demonstrate unrest before an eruption starts, with warning periods likely to range between days to months. 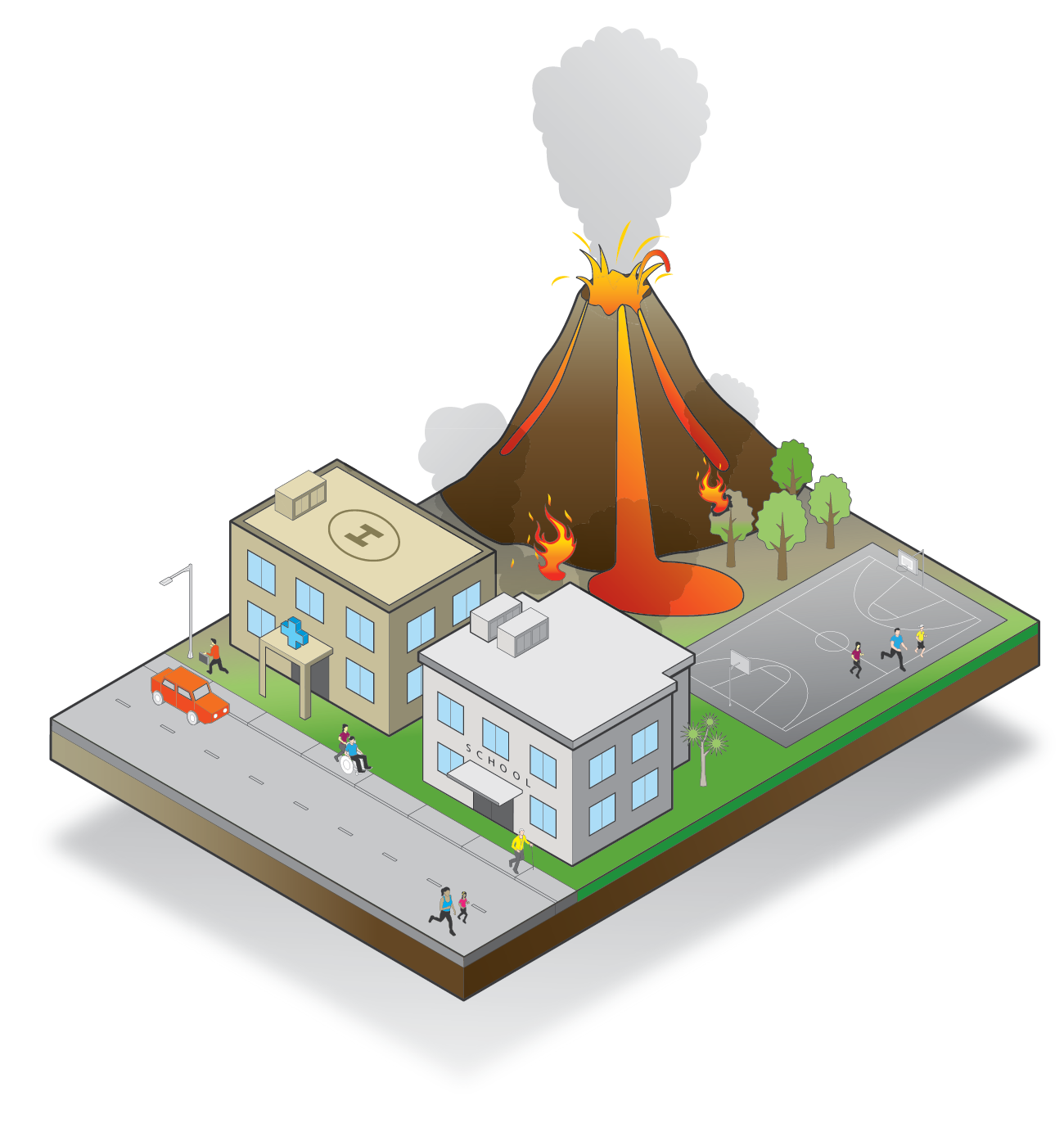 Most importantly, the physical effects of an eruption would impact significantly on the region. Displacement of residents, communities, and businesses from the immediate area of impact would also occur and impact on the health and safety of the Taranaki population. There would be significant disruption to regional transport, potential closures of the port and airport, and failure of lifeline networks. Direct physical and ash fall impacts would potentially damage residential properties, commercial and industrial structures, infrastructure, transport and service routes, and agricultural operations. Further hazards may well develop as a result of damage to hazardous chemical and fuel storage areas.

General economic effects of an eruption include increased immediate business disruption and long-term uncertainty, lack of confidence and demand for services, and may result in higher insurance premiums. There may be long term or permanent loss of land use and economic return from the most affected areas. These effects may continue for years or decades.

The agricultural sector forms the basis of economic activity in the Taranaki region and is of national importance. The region contains about 1800 dairy farms and most of them are situated on the volcanic ring plain surrounding Mt Taranaki. Both the agricultural and horticultural sectors would be significantly affected by an eruption particularly through contamination of water, pasture, and crops by ash. Disruption could continue for years before land is again fully productive and stock numbers are restored.

The oil and gas industry is also an important economic sector in Taranaki. Damage to oil and gas infrastructure including production plants, pipelines, and storage facilities, or loss of electricity to run equipment, would have a significant effect on Taranaki and the national economy.

Tourism businesses would suffer from a loss of market and other businesses may lose their sites or staff. Damage or disruption to transport routes is likely to result in loss of supplies. However opportunities will be created around the event related to tourism and recovery operations.

A volcanic eruption will have environmental impacts on the built environment, the aquatic and terrestrial environments, and the conservation land and animals located on Mt Taranaki and within the Egmont National Park.

The cost of ash fall clean-up is costly and ash is ideally disposed of in clean-fill sites, not in landfill sites.